THE LIFE, DEATH AND LIFE OF A ROOM

The Liverpool shipping magnate Frederick R. Leyland gave Whistler permission to modify certain details in the dining room at 49  Princes’ Gate, his London home.  What emerged was a complete reworking of the room as Harmony in Blue and Gold: The Peacock Room. Whistler held a Press View on 9 February 1877 (without Leyland’s permission), and distributed a pamphlet describing the decorative scheme:

The Peacock is taken as a means of carrying out this arrangement.

A pattern, invented from the Eye of the Peacock, is seen in the ceiling spreading from the lamps. Between them is a pattern devised from the breast-feathers.

These two patterns are repeated throughout the room.

In the cove, the Eye will be seen running along beneath the small breast-work or throat-feathers.

On the lowest shelf the Eye is again seen, and on the shelf above – these patterns are combined: the Eye, the Breast-feathers, and the Throat.

Beginning again from the blue floor, on the dado is the breast-work, BLUE ON GOLD, while above, on the Blue wall, the pattern is reversed, GOLD ON BLUE.

Above the breast-work on the dado the Eye is again found, also reversed, that is GOLD ON BLUE, as hitherto BLUE ON GOLD.

By the summer, artist and patron had quarrelled and Whistler was banned from the house. After Leyland’s death, in 1892, 49 Prince’s Gate failed to sell. Whistler and his wife were concerned about the fate of the room. They wrote to art dealers –  E.G. Kennedy in New York, and Alexander Reid, in Glasgow – urging them to buy it.  ‘Dont you know anyone in Glasgow who would make an offer for the Peacock Room?’ she wrote to Reid on 1 May 1892, ‘It could with care be moved.’

J.S. Sargent urged Isabella Stewart Gardner to buy the room for Boston Public Library. Stanford White commented: ‘The house is now in the hands of the Philistines, and is being gutted and torn down preparatory to furbishing up in the latest modern style.’ The room was bought by Mrs Watney of the brewing family, and then in 1903 by Obach’s,London dealers; it was dismantled and shipped to the great Whistler collector, Charles Lang Freer. For years it was enshrined in his house in Ferry Avenue, Detroit.  At Freer’s death in 1919 it was removed to the Freer Gallery of Art, Washington DC. Recent expert conservation removed layers of over-painting to reveal the original fine brushwork, and today it stands triumphal, a vivid blue and gold box within the elegant halls of the Freer Gallery of Art: a happy, almost a miraculous  ending.

Such rooms are vulnerable, as recent events here in Glasgow show. As I write this, firemen, staff, librarians and conservators are assessing the damage to the most beautiful room in Britain: the Library designed by Charles Rennie Mackintosh for Glasgow School of Art, and built between 1907-1909. 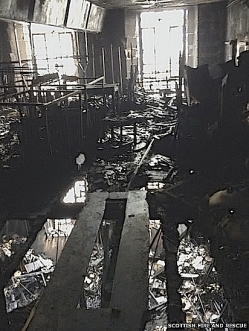 Scottish Fire and rescue: GSA Library after the fire.

I watched the School burning on Friday 23 May, a terrifying and heart-breaking sight. Yes, everyone got out safely and due to the courage and determination of Glasgow firemen most of the building, the museum and archives are safe. But the Library is gone with its precious artwork, books and journals: I pray that it will have a future life, fully recreated, at the core of an active art school buzzing with students and art lovers, as secure and beautiful as the Peacock Room.

GSA APPEAL: If any of my kind readers would like to offer assistance please visit
http://www.gsa.ac.uk/support-gsa/how-to-support/mackintosh-building-fire-fund/

The Peacock Room can be visited after seeing the current exhibition:

I am an artist and art historian, and my research is focussed on the work and life of James McNeill Whistler. Based in the School of Culture and Creative Arts, University of Glasgow, I am Director of the Whistler Paintings and Etchings Projects. These blogs are informal, and, I hope, interesting and even quirky discussions of individual works and events related to Whistler.
View all posts by mfmmacdonald →
This entry was posted in Uncategorized. Bookmark the permalink.